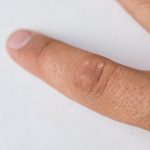 Don’t wait for them to multiply. Have them removed as soon as you notice them.
Warts are caused by a viral infection (human papillomaviruses). They are most common in school children and their general incidence in the population is around 10 per cent. They spread by contact and this is why they are usually present in several family members. Most often, they develop on the hands and the soles of the feet, as well as on the face and genitals (genital warts).

Usually a single wart occurs first to be followed by new ones in its vicinity or on other parts of the body. When you notice them we recommend you that you see a dermatologist as soon as possible, so that the doctor makes sure that the growth is in fact a wart and not some other type of skin growth. Getting rid of warts is the easiest, quickest and most successful if it is performed at an early stage.

At the SKIN dermatological clinic, we use cryotherapy, which is treatment with liquid nitrogen, to freeze the wart. About a day later, a blister will form where liquid nitrogen was applied, but it will heal in approximately two weeks. The procedure is slightly painful and generally several treatmentns with a three-week interval are needed. Warts on the soles of the feet are the often most persistent and pain might be felt when walking for a few days after the treatment. In addition to cryotherapy, we also use lasers to remove warts.

*the price does not include the examination