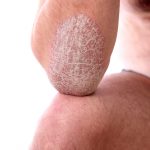 Under control again
Psoriasis is a chronic disease. It affects two per cent of the population, who are often members of the same family, indicating that it is a genetic condition. External contributing factors include injuries, inflammations and certain medications. Its onset is usually between the age of 20 and 30 or between 50 and 60.

It manifests itself as sharply limited skin changes that characterised by redness, desquamation and thickening, mostly on the elbows, knees and scalp but it can also occur elsewhere. As there are many types of psoriasis, the diagnosis should be given by a dermatologist.

Psoriasis cannot be cured, but there are many medicines used to reduce the intensity of the skin lesions, up to the point of making them disappear. At the SKIN centre, we use topical preparations (creams, ointments, lotions) to treat psoriasis. For more advanced stages of the disease that has affected an extensive area of the skin, tablets and biological medicines are also available. Laser therapy is also possible.